March and here we are again. 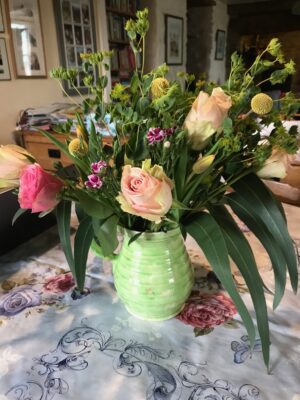 It was my birthday yesterday. March 12th. My sister sent flowers, as did an old schoolfriend. My son delivered a mauve-pink hellebore in a pot – a Lenten rose. In the morning, there were freshly picked daffodils on the table at breakfast. I’ve been feeling as spoilt as it’s possible to feel in these odd times.

The last time I stayed away from home was for just one night, the night of March 11th 2020, in a hotel near Haverfordwest. A few things jump out from my memories of that jaunt – driving with the radio on, listening to the Budget on Radio 4. Marvelling at the Chancellor’s total focus on trying to minimise the effects of the pandemic on the economy and on business. To be honest, we weren’t yet taking the situation seriously. We hadn’t grasped the impact the pandemic would have on our lives. We were still optimistic, still naïve.

The hotel stay was unremarkable. We didn’t eat there that evening as there was little to tempt our non-standard diets. Instead we drove to the Pembrokeshire coast, to a chilly, blustery Little Haven where we found a friendly pub to eat in. Afterwards, there was a charity quiz in which we came last. A total disgrace.

On the morning of that last birthday, we wandered briefly around the overgrown part of the grounds, where we learned that Sir William Hamilton was buried next to his first wife, Caroline. His second wife became, of course, Nelson’s mistress, Emma Hamilton. There was a leisurely trip back talking mostly about the predicted lockdown.

It would be four days till the announcement about stopping ‘unnecessary travel’. Then, of course Boris, pulled the plug on that much abused word, ‘normality’, on March 23rd. A whole year.

Now there’s a ‘roadmap’ out of all this. Whatever happened to that perfectly useful word – PLAN? Tourism will be starting up again in a couple of weeks’ time. Slowly at first, with all the usual suspects by way of restrictions and caveats. I’m cautiously positive. But my priorities have also changed. I’m ready to step back from being consumed by this family enterprise.

It’s taken a succession of lockdowns for me to realise that writing is what I want to concentrate on now. I started writing more poems again last Spring, then began this little blog. Recently, I’ve finished a children’s book, about mice! I’m hoping to get it published. We’ll see…

So, it’s been an unimaginably confined and confused year for all of us certainly, but a year where I’ve rediscovered what’s important to me. Now, I just need to make it happen!