A lot of water, and another birthday 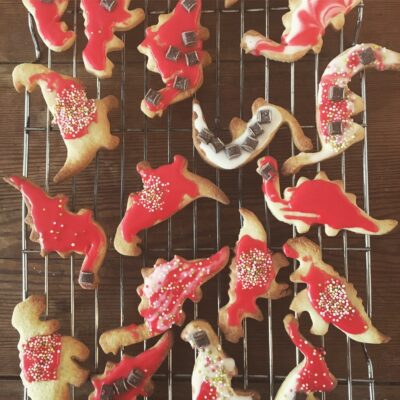 The smallest small turns four. It’s been a dinosaury kind of day – dino cake, dino-themed cards and presents. Yesterday he and his sister helped my daughter make both the cake and dinosaur-shaped biscuits in readiness for today’s birthday tea.

The weather has been truly dreadful. It seems like everywhere is either damp, waterlogged or leaking, but at least we’re not afflicted by flooding here at the farm. There are many folk in other parts of the UK, and not so far away either, who are badly affected. My son had a complicated trip home from work in Pembrokeshire today due to roads being blocked by water. Storm Christoph is to blame.

But back to birthday boy. I wrote a little poem this morning, inspired by his fascination with those terrible lizards.

The pull of the lizards

Seen on cartoons, in books, as toys – he knows them all.
Herbivore,
carnivore,
omnivore;
voracious in their appetites; he can say their names,
their terrain of choice, their habits, likes. Their world
fills his games.

This little boy, like many more, he knows them all.
Real creatures stalk his world. They populate
his days, his nights. He likes them mean
and likes them nice. He likes them huge
with an enormous roar. It doesn’t matter
that they’re extinct, that they’re not here now.
He knows they lived and thrived before.

He likes them good but the bad, somehow,
are better, more exciting. He knows their names.
The terrible lizards’ pull survives; they fill
the minds of most small boys.

In the games he plays on the kitchen floor, he likes
them huge with a very loud roar. It’s safer now
they’re not here anymore; those terrible lizards –
who lived and thrived and were fierce once before.
He knows their names-
all the dinosaurs.